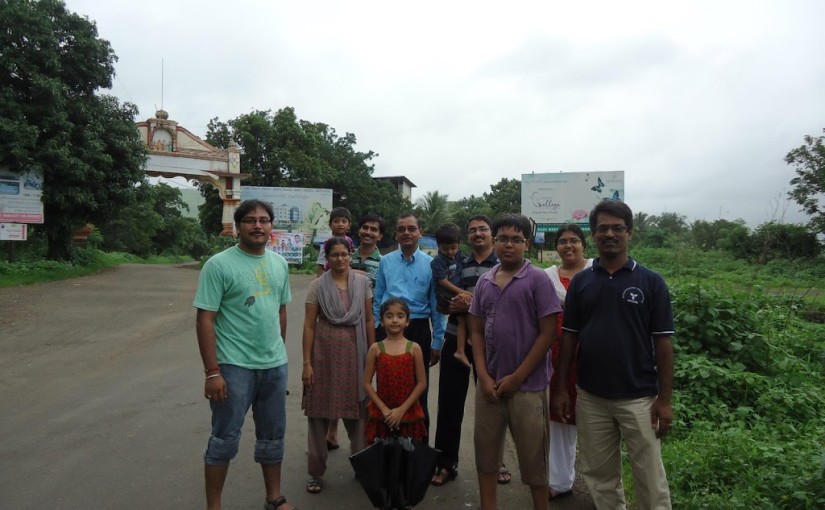 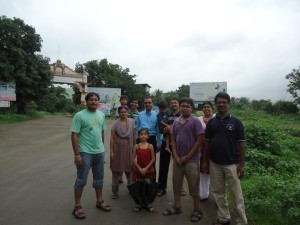 Mothi mama had come to Panvel. Post lunch I, Suresh dadha, Balaji met at Nandhini bei’s place along with our families. Balaji’s parents and sister had also come to Panvel. After lunch we generally lie down and discuss the earthly problems or movies or food. Since long, I have been inviting them to the river behind Panvel. Even others were suggesting but everyone had starting trouble. Don’t know who got irritated, suddenly it got declared and finalised that we will go to the river today. We decided to take 3 cars – Balaji’s, Nandhini bei’s and mine. I went to bring car from my home. I did not forget to bring my cooling glass – the green one that makes me look more handsome. I was waiting with my car down Nandhini bei’ss apartment while others got prepared for the trip. I don’t know what they prepared that took them 23 minutes to get down. I mean, they didn’t even prepare ‘ambaad bhaath’ [i.e. tamarind rice] or any other snack. I heard that Sankari bhavi was still sleeping until everyone were out in their slippers and Nandhini bei was about to turn the key of main door to lock it. Sanjeev took his own time in searching his iPod that added to the delay. Soorya was already with me in the car or the start would have delayed further. 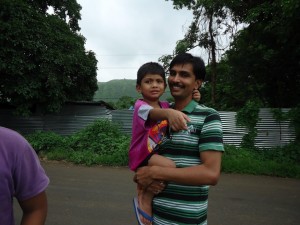 Finally when everyone came out and filled the cars, the procession started. The customary delay, due to the multi-tasking, was carried out by Suresh dadha. He had to collect some affidavit from someone on the way for some passport issues. So he stopped on the way to finish that job. I carried forward towards the river. When we were crossing the Archie’s gallery I was eagerly looking at… ok leave it… it is not related to our trip. When we were crossing the Sukhapur, Sasi was eagerly looking at the cupboard and sofa stores. I had promised to buy her sofa some 8 months ago. We crossed the borders of Panvel and came out towards the greenery. Mind you, I was wearing my spectacular cooling glass all this time. I drove the vehicle towards the Mahalakshmi Nagar and I stood at the turn that went towards Chincholi, for others to catch me. Balaji caught me in short while in his Zen Estillo. So both Maruti cars had come and we were waiting for the Tata Indica which was driven by Suresh dadha. I was sure that they won’t miss the route as Ramesh bhava was with them and he holds a map of Mumbai (including Raigad and Thane) in his subconscious mind. And Suresh dadha too arrived at the turn properly. 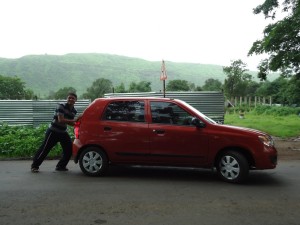 From the turn all went ahead. I handed over the car to Sankari bhavi who had the wish to drive the car since long. She started to drive with me on side and her mom, Sasi and Sugashini on the rear. The car started on first gear and went all the way to the river in first gear. Once, for a short while – say for some 17 metre, she drove in second gear. You should have seen our faces by that time. Our expression was those who jump from flight without parachute and hit the ground at 22 kmps. But when Suresh dadha, who have already reached the river, saw Sankari bhavi driving the car he created a much funnier face. Seeing the face, Sankari bhavi stopped the car in the middle of the road, in the middle of some gear – probably somewhere between one and neutral. It took her further 7 minutes to turn the car to right and park. Yes, there was help from Suresh dadha.

We all reached the riverbed, safely. 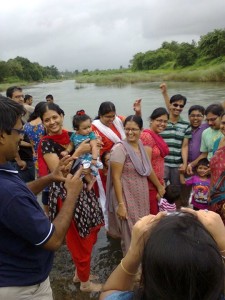 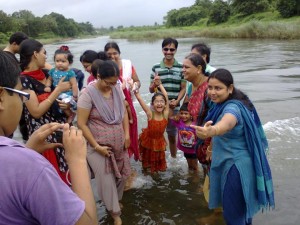 The water in the river was very shallow, but fast. Kids were all very eager to jump into the water. Lakshan was calmly enjoying in water and Soorya was just dashing the water. Manoj and Varsha too got drenched. Water was clean and the flow was pulling us into it. We were there almost an hour, scaring the passing fishes and birds by our shouts. At one point, Lakshan got scared by our shouts and we went under control. Families with kids were visiting the riverside. People had found that as a little picnic spot. However, vendors had not still found the picnic spot. There was not even a tea stall. We all were on the banks of river, dipping our foot, 1.5 feet deep in water. The water flow was quite high that it would have pulled people of my strength along with it. We enjoyed the river for quite some time until we took photographs as a proof that we enjoyed. Also, drizzle started and hence we started from the location. Photographs were shared, tagged, commented and liked on FaceBook.

A nice evening came to an end.
Few more snaps below: 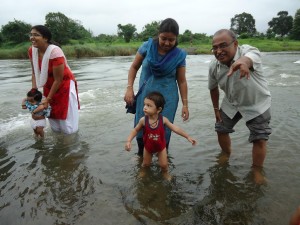 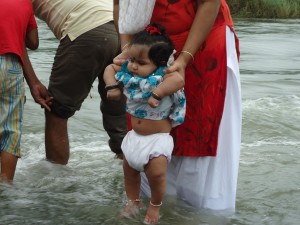 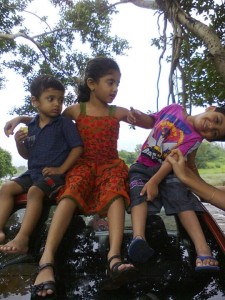 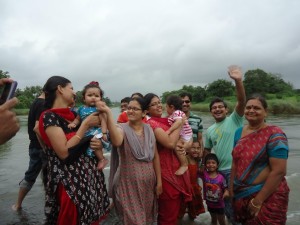