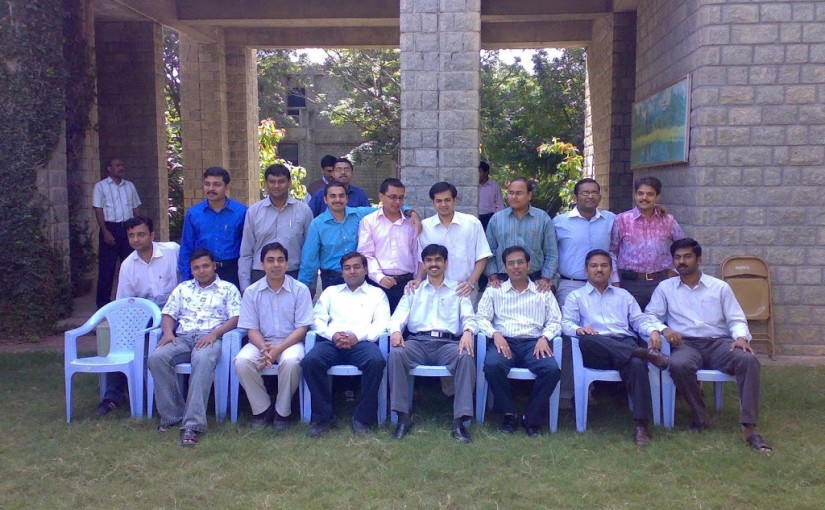 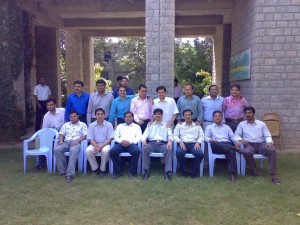 Front (L to R): Empty plastic chair, Husain, Dinesh, Anupam, Hardik, Rahul, Sunil, Muthu
Back (L to R): Mitesh, Rajeet, Darshan, Tushar, Dushyant, Jigar, Raghavendran, Prasad, Viral
Backer (L to R): Nilay, Folded steel chair
Backest i.e. behind pillar (L to R): Amit, Sajith
Standing alone (safely): Program coordinator
First email on 01-Oct-2009 11:31 to all MPRE-X save one:
Two years ago, we met at Bangalore. Everyone was happy that they don’t have to go to office as they used to go regularly (working is a very different issue). Some were happy to have good breakfast, lunch and dinner. Some were happy with the recreations like TT, tennis court, cricket, etc. Some were happy with unlimited internet and data downloading (rather than sharing). God knows what ever were downloaded. We just kept filling our hard drives. A very few were happy with the computer center. Nobody bothered for the library. Some were happy with the snacks in between the classes. Almost everyone were happy with the ‘Mento’s of various flavor. Except one, everyone were allowed to take a break from the class ‘for a leak’. Everyone happily designed the ‘sleeping bags’. Many asked questions in the classes. Some funny, some logical, some confusing and some completely stupid. Some cleverly stayed silent. Some sincerely did the homework. Other just took inspiration from it (or say copied it). Also that there were no exams / evaluations. Some went to the black board with answers. Some without answers but with just ideas. Some were genuinely happy for the so near ‘Chivas’. And the parties thrown by the professors. Some deeply discussed about the purchasing power of countries. Some on the cricket scores. And the blunders made during the game (some blunders are still debatable). Some were dedicatedly attending the yoga classes. All were later forced to, as a part of program. Some did yoga, some took rest, some enjoyed and some slept. Some even snored loudly. Birthdays and other occasions were celebrated, sometimes genuinely. Many a new terms were learnt. Strategy, Branding, Finance, Law, Project, Retail, Stress Management (in fact the professors learn more about this from us), Macro economics, Micro economics, Statistics, Working capital, and so on. You guys may know better. Movies were played. Guest lectures were attended. Bannerghetta field trips were arranged. Some went on purchasing spree. Some went on movie spree. Some for just bird watching. Finally, options were given. Postings were provided. Some joined new department. Some went back to their old. Some were murdered. Some committed suicide. Anyway, we departed the institute happily. Waved ‘Chivas’ a sad good bye. On a total, it was great period of 3 months. We knew that we would come back after a few months.

Two years have passed since 01-Oct-2007. Hope we meet again for AMPRE. Just two years more. Hang on till then.

Follow-up email on 01-Oct-2009 18:39 to all MPRE-X including the one saved in the earlier email:
There was one who used to arrange every party and take the lead in every occasion. The Warren Buffet of every market, Chengis Khan of every invasion, Dhirubhai of every business and what not. Just because of him we came to know that Kotak Mahindra Bank too sends their executives to management programme at IIM-B. By typo I have missed his name. And I sincerely apologise for missing one of the navratna. :-[

He just called through the finance ‘thop’, my physical replica Hardik (who recently became a proud father for a baby boy) to indicate the miss and I realised my mistake of missing his name.

If someone else is missed (apart from Smita and Rahul) please do inform.

See, this is the reason why we should keep in touch regularly. 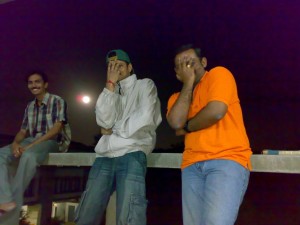