One thing good with big companies is that they have more access to great minds.

‘Leading Expert Access Programme’ aka LEAP is one such initiative by Reliance Innovation Council. If you have access to Reliance intranet, you may visit http://leap.ril.com to know more about it. For others, LEAP is a programme that provides Reliance employees with access to global thoughts and innovation leaders through an interactive session. 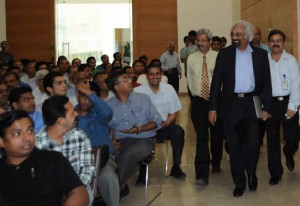 Sam Pitroda was invited at our campus on last Saturday 22nd September2012. He is the person who cultivated the habit of saying ‘Heellloooo’ among the Indians. He was one of the key people in empowering Indians with telephone. I have said about this in my earlier blog ‘Journey of Phone’ too [http://nvkarthik.blogspot.in/2011/04/journey-of-phone.html]. I did not miss the opportunity and booked myself a seat. The lecture was scheduled for 4:15 PM. However, due to traffic snarls Sam Pitroda was able to reach the podium by around 4:45 PM. Until then, the packed room eagerly waited for him. So were the audience who were sitting outside to watch the lecture on screen. I assume that there could be more than 500 in total. I do not remember exactly line by line of what Sam Pitroda said. Below excerpts are recalls from my mind and is penned down from Sam Pitroda’s perspective. I believe that more than presentation, the Q & A session is more interesting as its an extempore. A speakers originality will come out in Q & A session and hence I have concentrated more on that.

I am privileged to be here at Reliance as I have a great personal relation with Reliance family. When I had my first heart attack the very first call, asking about my health, came from Dhirubhai. I too am a Gujarati by birth and I feel my roots here.

I am a son of a carpenter. After my college, like everyone at that period, I too had dream of America. So I applied for Masters and moved to US. There I had my establishment and was going fine. Once, after I visited back to Delhi, I wanted to call my wife and say that I have reached safe. I was not able to make an international call. I started to think. When I went back to US, I told my family that I am going back to India and going to fix it. I flew back to India and when I reached here, I have no idea on how to proceed but I had determination. I met Rajiv Gandhi and started to work out the plan. We were clear that if it has to work in a country like India, with such a large population, the scale should be massive. There were doubts about the implementation but I had great support. We started to roll out. Slowly the cost per line started to go down. Once it came to such a level, which could be afforded by a common man, then was a boom and no return back.

Later I had to go back to US. One day I thought that India has great potential, but some things have to be fixed. I came back to India and started working on tapping the potential. This time we are working about developing “Public Information Infrastructure”.

Now, what is Public Information Infrastructure or PII?

India has lot of public data, but in paper files. We are establishing infrastructure to get these data at a single place for easy retrieval. All educational and research institutes will be interconnected for capturing the knowledge and use it for general public. For example, mangoes from South India have great demand in Middle East. But the shelf lives of these mangoes are just 7 days. When we put up this to university, one of them had solution that would increase the shelf life of mango to 35 days. Now the mangoes are sold in ME too and the farmers are getting more profit. When we asked the university, ‘Why didn’t you said this to farmers earlier?’ they said, ‘Because, no one asked us.’ Now we have provided a platform, public could tap the benefits. The PII also includes provision of broadband connectivity to Panchayats across India. The Justice system will also benefit from PII and help in faster clearance of pending cases. More than 1000 citizens, who were stuck in our jails, without any case were identified and released. PII also intends to improve innovation. We have announced innovation awards in each constituency of a Member of Parliament. Every constituency will have two innovations identified every year and awarded. In due course we will have thousands of ideas to be implemented. You will find more about PII at http://iii.gov.in/ 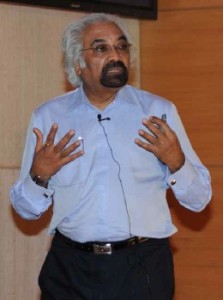 Audience: How much money is put into the PII?
Sam Pitroda: Government is investing more than 1000 crore in Public Information Infrastructure.

Audience: If so much investment is made, why government is not publicising it?
Sam Pitroda: What to do? You have to ask this question to media. You are interested in gossips. I went to meet Kapil (Sibal). We discussed a lot on education. Once I come out, instead of asking on the subject discussed, the media quoted a political controversy on Kapil and asks, ‘So what do you think Kapil will do now?’

Audience: Is knowledge related to education?
Sam Pitroda: No. Not at all. We were travelling in our car through a village. There occurred a leak in our car’s radiator and we were looking for a mechanic. We stopped a villager and asked for a mechanic. He said that there is no mechanic but a person who does these work. I was sceptic. Anyway, with no option in hand, we went to his place. The so called mechanic opened the bonnet and after some inspection said, ‘There is a leak in radiator’. I said, ‘I know that’. He went in while i kept wondering on what this chap can do. He came out with ‘Haldi‘, put it on the radiator and said, ‘Now carry on saab. This will arrest the leak. Also carry some more haldi from me in case you need it’. Now, this young chap has no education on cars, but his presence of mind, finding solution to a problem is marvellous.

Audience: Why did you go back to US?
Sam Pitroda: You see, I am a simple man as you all. I too have commitments and needed money for my family. I had cancer and a couple of ailments. My parents needed medical attention. I needed money for all these. I had heart attack. And I literally lost my heart – I mean Rajiv Gandhi. I have to go back to make a living.

Audience: What do you think will happen to your projects, if government changes?
Sam Pitroda: These are government projects. We can not predict anything. You fear that the projects may be dropped. I see that the next government will know the potential of these initiatives and push it even further.

Audience: Is it worth providing such state-of-art computer devices to politicians who may not even know of using it?
Sam Pitroda: When we gave computers to ministers for the first time, I was actually happy that they allotted some place in their office to keep the computer. They were kept covered for a long time. Then someone in their office started using it. Slowly they got interested and tried to learn the equipment. Once they learnt, they knew the benefits. Slowly they started using it. Yes, new technologies will not be used immediately. People take time to become comfortable with it. But, that’s how it works.

Audience: How long will it take to come out as paperless government.
Sam Pitroda: Don’t ask. Our IT department is still working on paper files.

Audience: There are already so many cards. What is the use of another card like Aadhar?
Sam Pitroda: We are integrating, not making another card. Long ago when I went to start a bank account, the banker asked for my identity because they wanted to know about me. I  said, ‘I am giving you my money. So actually I need to more about you and its not the other way round’. Now, once all these identities are integrated, these digital records will vouch for you and you will not have trouble proving someone that it is indeed you.

The session ended with a high tea. But since it was Saturday and time was way beyond 6:45 PM, people rushed to their homes.