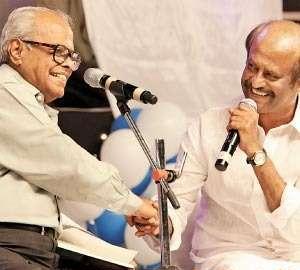 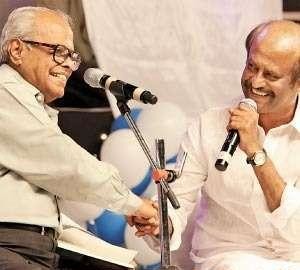 Last year, in 2010, Director’s Association celebrated its 40 years of existence.

Highlight was the interview of Rajnikanth by K Balachander.

I had read the interview in Anandha Vikatan a few weeks back. But this Sunday I got a chance to watch the interview in Sun TV. Impressed and felt justified once again on why Rajni is ‘Super Star’.

I list a few exchanges which have impacted and still in my memory.

Director K Balachander got on stage and sat on a chair. Actor ‘Super Star’ Rajnikanth was invited to sit in an adjacent chair. Both were facing the audience, with Rajni provided a hand mike and KB with a mike on a stand.

KB introduced himself, “I am K Balachander, a director and I introduced Rajni to cinema”. Rajni did a ‘vanakkam’ and folded his hands like an obedient student before a teacher. He was sitting straight. KB continued, “Rajni has accepted me as his Guru and I have accepted Rajni as my student. There are a few questions that everyone wants to ask Rajni and there are a few questions which only I can ask Rajni. I have noted these questions in my diary, as my memory is not great these days and I may miss some sequence while questioning. Also I will be keeping the discussion informal and will address Rajni by his name as I used to do when we are private. No one please do not see it as a humiliation. Rajni is my boy. Rajni don’t know these questions and his answers on this stage would be a extempore. For questions which he do not wish to answer, he may respond with – No Comments. Shall I start?”

Rajni smiles and further straightens up; the crowd applauds and roars.

KB, “Could you, being Rajnikanth now, become Shivaji Rao again?” Rajni, “My still being Shivaji Rao is the only reason why I am Rajnikanth today”. There is a thunderous applause.

KB, “Do you remember when I renamed you as Rajnikanth”. Rajni, “Yes. It was a full moon day. A day of Holi festival”. KB, “Good. You used to visit me every year on the day or atleast call by phone. You continued for some eight years. You forgot me then”. Rajni, “Sorry sir. Became a bit busy and forgot. Will call henceforth and will not miss”.

KB, “You are a great Super Star now. You can not walk freely on road. You can not go to theatre and watch movies. You can not drink tea at a petty shop. You can buy the Saravana Bhavan hotel chain, but you can not have a cup of coffee there. Do you feel you miss your privacy”. Rajni takes a deep breath, “Yes. I miss being an ordinary man. I miss my privacy. But, yes, the Shivaji Rao in me is wide awake. This position has not disturbed him”.

KB, “While working with me, have you ever thought that why I am stuck with this man?” Rajni, “Many a times”. And roars with his trademark laugh. KB raises his diary pretending to him. Rajni bows and crowd laughs at Rajni’s response and their act.

KB, “Films like Veerapandia Kattabomman, Enga Veettu Pillai are remembered even today. Similarly which film of yours would be remembered by people in future?” Rajni, “Shri Raghavendra”. KB helps with, “Baasha”, which Rajni acknowledges. Rajni continues, “Endhiran”. KB asks jovially, “Don’t you have any of my films to say?” Rajni shrugs off and gestures an apology.

KB, “Why don’t you direct a film”. Rajni, “I don’t know direction”. KB, “But, will you or have plans to direct in future?” Rajni, “Can’t say now. It’s time that has to say”. KB, “If you direct, will you keep me as your assistant director”. Rajni feels humbled and bows to KB and the crowd.

KB, “Tamil cinema has raised you to this level of ‘Super Star’. What would you offer in return?” Rajni, “I will definitely do something that would make all of the Tamil people proud”.

KB, “You have reached the top of Indian film industry. After ‘Endhiran’, you have yet again proved that you are a one man army. Are you worried that you may lose this position?” Rajni, “I have reached this current peak position because of the one film ‘Endhiran’. It has not affected me. So I am not worried that I will lose this position, as in the first instance, I am not even believing that I hold this position”. KB, “Still, do you feel that you have to be careful now?” Rajni, “Yes, I have to be even more careful now”.

KB, “I have watched Amitabh in ‘Cheeni Kum’. I want you to make similar roles. Not the same, but such roles that will bring out your abilities even more”. Rajni, “Basically, I believe that I am a commercial hero. This is a big industry involving a lot of money. I have to deliver what my producers and fans want. I wish to do but would certainly ensure that project would be successful”.

KB, “Do you have any plans of writing your autobiography?” Rajni, “I have no idea of penning an autobiography now. An autobiography should contain only truth and in the process I would end up hurting a lot of people. I have read Mahatma’s autobiography. He had those guts. I too will write autobiography once I get such guts”. KB, “But I sincerely hope that you should write. Your life would be such an inspiration for anyone”.

KB, “Have you ever watched any of my movies more than once?” Rajni, “Many times. Especially, I like two movies the most. I have watched ‘Aval Oru Thodarkadhai’ 8 times and ‘Arangettram’ 12 times”.

KB, “Who is your favorite director?” Rajni, “Mahendren”. There was no inhibition from Rajni’s side, even when he is interviewed by another great director who actually introduced him.

KB, “Do you envy anyone in life?” Rajni, “Yes. The sadhus of Himalayas. Wonder if I could lead a life like them”.

KB, “Have you loved someone, when you have still a bus conductor?” Rajni with a laughter, “Yes”. There is thunderous laughter and claps in the audience. KB, “Would you tell me in person? I will not disclose it to your wife”. Rajni smiles but says, “Yes”.

KB, “This is kind of rapid fire. You have to answer instantly. Ok? How many films you have acted?” Rajni, in a moment, “154”. KB, “Correct and great. Many do things for sake of doing. You know what you do and are actually keeping a close track of what you do”.

KB, “Whom you would identify as your close friend, if you have to say only one?” Rajni, “Rao Bahadur”. KB, “Ok, I think most know it”.

KB, “Whom, even including the politics, do you admire the most?” Rajni, “Lee Kuan Yew. Former prime minister and founder of Singapore. He had overseen the development of the country”.

KB, “Which is one location, where you would like to spend time with family?” Rajni, “London”.

KB, “Which is one place, where you would like to spend time alone? Now don’t say Himalayas”. Rajni, “Nepal”. KB, “That’s again is too close to Himalayas again”.

KB, “You are a great actor. When can we expect a national award from you?” Rajni, “It’s not in my hand but in the hands of you directors”.

KB, “There is one question that is in everybody’s mind. When would you join politics?” Rajni shows his hand up and says, “That only God know”. Here we again go without an answer.

KB, “How many cigarettes do you smoke these days?” Rajni, “I have reduced a lot”. KB, “I was the one who publicised your unique way of handling cigarettes. But yes, smoking is bad. I want you to drop this habit.” Rajni, “Ok sir”. KB, “Yes. Leave it. Smoking is a bad habit. You know that I too was smoking. I wish you stop smoking. It is good for you and many others too. Many will take a clue from you and stop smoking”.

KB, “Kamal keeps asking me to direct him again in some movie. But you do not ask me to direct you. Moreover, you have gone to a level where I can not make you act in my film. But if you are okay I can make you act in my stage drama”. Rajni, “Ok sir”. They shake hands as calling it a deal. KB, “This April 15, 2011, I will stage my drama ‘Major Chandrakanth’. Would you act as Chandrakanth in the play?” Camera pans to show Rajni’s daughter nodding her head in denial. But Rajni goes ahead saying, “Yes sir. We will start whenever you say so”.

KB, “Do you remember when you came to me for your marriage?” Rajni, “Yes. I and Latha came to you. You told me to be more responsible and start taking life seriously. And to take care of Latha properly”. KB, “I also told Latha to take care of you well and also warned that you are a short tempered guy”. Latha’s smile from among the audience reveals that she recalls the moment.

KB, “Can you tell us all a short story?” Rajni is famous for his short stories that he tells in stages, but now he says, “No sir. Not now. I am overburdened with emotions now”.

KB, “If you had to ask me one question, what would it be?” Rajni, “When would this end?” and starts laughing.

And the interview ends with a standing ovation.